This is the first Scottie, Sophie.  She was born September 24, 2001 and was given to Mom by our human Sissy.  Sophie actually started out as someone else’s Scottie.  She was sold by her breeder at too young an age to a girl and her family.  It was not a good match.  Sissy worked with the girl, was aware of the problem so she was able to buy Sophie for Mom that December.  Thus began Mom’s love affair with Scotties.  Within the first year, Mom realized that Sophie had a disorder in the breed known as ‘Scottie cramp’.  Cramp is a hereditary neuromuscular condition, usually induced by excitement and exercise, which causes contraction and stiffness of muscles.  Most of the time it was controlled by eliminating the onset of the symptoms leading to cramping episode so Sophie was able to lead a wonderful life.  Sophie crossed the Bridge in November, 2011.  She died of cancer which Mom believes was originally TCC that had metastasized to her lungs.  She died three weeks after diagnosis.  She was a great Scottie. ~ Indy and Lucy 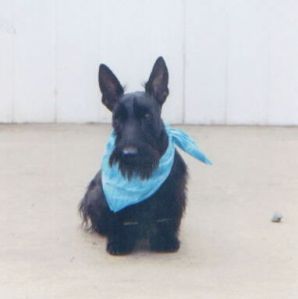 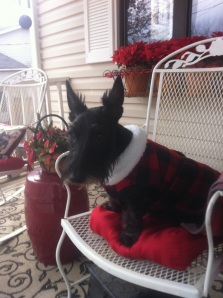