It is with sad hearts that we had to say goodbye to our buddy, Traveler.  He has not been well since Christmas.  Additionally,  he was quite old for a parakeet …10 years.  He was a rescue bird.  Mom found him after a summer storm much like the one we had this weekend.  She was out for a walk when she saw him in the street; he flew to a low hanging branch as she approached.  Unfortunately, his view was blocked by a pickup and he did not see the kitty beneath the tree.  Flying to escape the kitty he hit the mirror of the pickup; fell at Mom’s feet and the rest is history.  Mom brought him home and named him Traveler after Robert E Lee’s favorite horse.  First Scottie, Sophie was jealous of Traveler.  When Mom changed the paper in his cage, she would go to another room and not come out till Mom was finished.  We liked him.  We only rushed his cage a couple of times when we were pups. 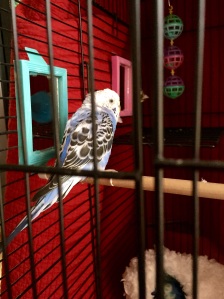 Here is Traveler during better times.  He was very pretty.  Actually he was a she because one time he laid an egg but we have always called him he.  Mom put a clock by his cage that had bird sounds at every hour.  It wasn’t too long that Trav was making all the bird sounds himself. 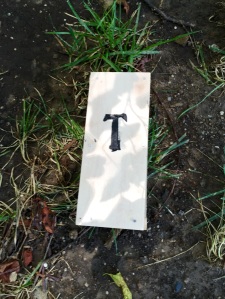 So we laid Traveler to rest Friday afternoon in his little box that Dad built. 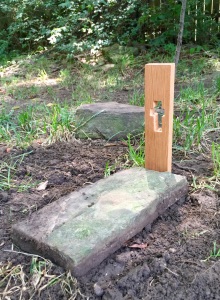 Fly free at last. ~ Indy and Lucy, Mom and Dad

Life At The Golden K Without Kali