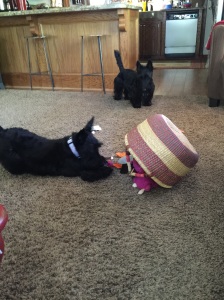 Mom has wanted to do some damage control on our toy situation for a few weeks.  I don’t know if I have mentioned it but she is a toy recycler.  Every so often she switches out our toys with other toys she has previously put away.  Thus we have an endless supply of ‘new’ toys.  However in must be done in secret or at least away from Sister’s prying eyes or nose.  I know it is difficult to believe that some Scotties don’t tear up their toys but that is Sister.  She still has her first toy.  On the other paw, I am fairly ambivalent towards toys until Sister flaunts one.  By this I mean, she runs up and down the room with the toy of the moment in her mouth while making a growling sound.  Finally on Friday, Mom seized the opportunity. 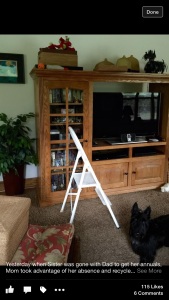 While Dad took Sister to have her annuals, Mom sorted through the toy baskets placed strategically in different rooms.  To throw Sister off the track, she took pig that had been in ‘time out’ on top of the tv and placed it in a key position.  I, of course, was sworn to an oath of silence. 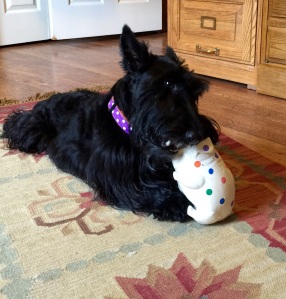 Sister noticed the pig immediately and poked it with her nose to make it squeak.  She would guard it; poke it, but really didn’t start to play with it till Saturday morning.  That is when I knew I had to have it and made my move.  She immediately started her shrill  “He’s got my toy.” barking. I ran to the bedroom and put my head in a corner and refused to budge.  No ‘drop it’ command for me.  Mother just walked away and closed the door.  I could hear her telling Dad the minute he got home but by then it was too late….good bye piggy.  Don’t worry Sister’s got another but I heard Mom tell Dad that I was out of chances with rubber toys.  😦 ~ Indy

9 thoughts on “Another Pig Bites the Dust”